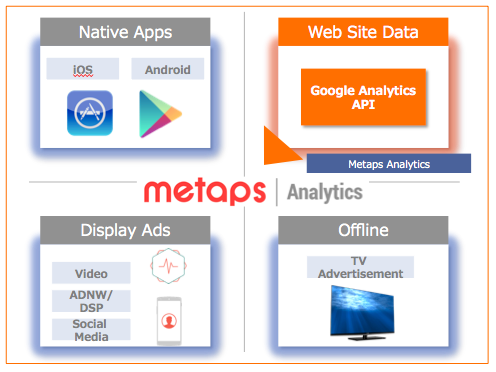 App publishers commonly use television advertisements to reach a mass audience. At the same time, video ads on smartphones are becoming more popular to complement broadcast television, which has become less relevant amongst the younger generation.

Until now, the statistics of advertisements run on various media was fragmented, and advertisers had difficulty with visualizing this data. With Metaps Analytics, the analytics data from multiple sources is consolidated and shown side-by-side. As a result, television, Internet, and smartphone advertisements can be combined with website statistics from the Google Analytics API, and then viewed in real-time in just one dashboard.

About Metaps Inc.
Metaps provides a one-stop app user acquisition/analytics/monetization platform (known as ‘metaps’) and an online payments solution (known as ‘SPIKE’.) Metaps uses data analysis and artificial intelligence to optimize ad delivery in an efficient method. Their strategy is to deliver the most relevant online and offline advertisements to the target audience.