Upside, Partnership for stability enhancement of blockchain platform with Dcenty

Upside Co., Ltd. (CEO Baek, Seong-cheol) said that it has formed a strategic partnership with Dcenty (CEO Kim, Yong-Dae) to strengthen the stability of blockchain platform. 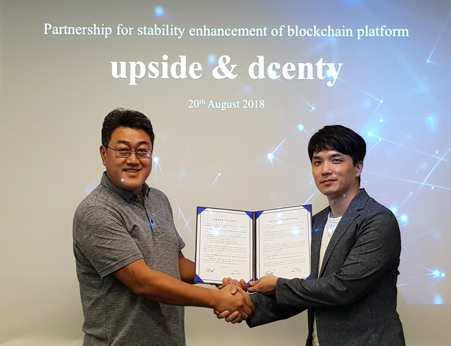 Through this partnership, ProofX platform will be developed which is data integrity and Time Stamping Authority (TSA) with blockchain technology that overcomes the disadvantages of existing TSA.

TSA is a service for preventing forgery and falsification by requesting information of electronic transaction data between a user’s information and an information system in an open network in a trusted third party (Approved certificate authority).

CEO Baek Sung-chul said “Upside Inc. is to create various platforms based on blockchain, it signifies a partnership with Dcenty Inc.” and said keeping “As the significance of KYC patents of Metaps Plus, this combination of security and blockchain technology of significance is meaningful. The technology of Dcenty Inc. will spread the scope of privacy protection by giving a big influence in cryptocurrency market in the future.”

Dcenty is a Korean venture company that developed a cryptographic module and developed a product that directly applied to actual IoT door lock. They received K-Global IoT Development Award and JETS Award in 2017. The ProofX project will start in earnest in September 2018.

Upside is a subsidiary of Metaps Plus (CEO Kim, Seung Yeon) of Korea Fin Tech company, and is developing as a blockchain specializing company in parallel with development of cryptocurrency exchange and TGE agency.